"the ultimate aim of any protest movement surely is to cause a change in the behaviour of the targeted party. In order to succeed, it is vital that the message conveyed by the demonstrators is clear and unambiguous. The target must know what the protesters want, so that it may weigh and choose between the pros and cons of undertaking that course of action."

"The non-violent campaign to propagate the ‘Middle Way’ formulation of the Dalai Lama has been compared to the Gandhian satyagraha movement. But there are significant differences. Each of Gandhiji’s fasts or marches had a clearly specified goal."

"Unlike Gandhi’s satyagraha, Tibet is a geopolitical hot potato attracting many players with diverse motivations. While many may broadly support the Dalai Lama’s ‘Middle Way’ formula of ‘genuine autonomy’, there are other strands of very different hues. At one end are pacifists who wish to avoid violence in Tibet. Others focus on religious freedom or ecological conservation. There are groups who have declared themselves quite forthright about seeking nothing less than full Tibetan independence. Yet other sympathizers have their main interests in human rights, Darfur, Xinjiang or the Falun Gong. There is also undoubtedly a sinister fringe that is cynically unconcerned about Tibet but quite happy to promote any action to destabilize China and even encourage ‘regime change’ in that country. Finally, there is the Hollywood chic and Page 3 element for which Tibet is once again the flavour of the day. It is unclear to what extent everyone in this motley coalition accepts the Dalai Lama’s leadership."

"Gandhi studied his opponents very carefully. He knew in what way and how far he could push the British."

"It is not quite clear whether the end game in Tibet has been similarly thought through. If not, an escalating series of inchoate and unfocussed protests is likely to have the opposite effect on Beijing. As calls from different countries mount for it to negotiate ‘genuine autonomy’ with the Dalai Lama, as yet others threaten to boycott the opening ceremony of the Olympics, China would still remain uncertain about whether the Dalai Lama is in full control of the agenda. Is he or is he not a ‘splittist’? Or is that a secret agenda of India and/or the USA? Unless reassured on these questions, any negotiations that China may hold with the Dalai Lama will remain superficial. Not only that. A bewildered Chinese public would feel greviously humiliated at the way the Olympics have been hijacked, and their Government pressurized and pushed around. Extreme nationalism will probably be the result. An angry and resentful China would be a risk for the world, and particularly so for India."

"For the Dalai Lama to be a credible interlocutor, he must establish ‘genuine autonomy for Tibet within China’ as the negotiating pivot, and disassociate himself explicitly from any conflicting objectives and activities espoused by the émigrés. India has a key role to play, with diplomacy and dignity, conveying discreet but clear assurances to Beijing that it is committed to China’s integrity and is not machinating to the contrary in the background, with or without US encouragement." 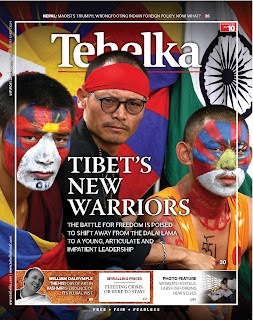